Corporate Social Responsibility refers to the extent that a business bases their actions in account of wider world situations outside of their business.

McDonalds is an international fast-food chain, who's Corporate Social Responsibility (CSR) is written as:
'At McDonald's®, giving back to the community has always been a key mission and part of our heritage. And in Hong Kong, we are proud to be part of the communities we serve and community involvement has always been a part of our culture.'
McDonalds works with a variety of Charities to sustain their CSR and work with the heart of their community, and they specialize in their own charity titled 'Ronald McDonald house charities'.

By working with various charities, McDonald's appears to have a relatively large CSR, by involving themselves with communities and charities outside of the company. This makes them appear like a company who like to involve themselves with their customers and communities, in order for them to appear ethical and socially active.

One of the issues rising from McDonald's CSR work, revolves around the Ronald McDonald house charity. Ronald McDonald was a fictional character designed to represent the McDonald's industry; who has now been removed as their company representative mascot, due to child exploitation issues. This charity has now lost much of its recognition due to the mishap. In addition to this, all the charities McDonald's work for, revolve around a small demographic; young children. To widen their demographic and their CSR, McDonald's needs to increase the amount of CSR revolved work; which could mean donating and representing more charities, or involving themselves in more community work.

However, what McDonald's has done positively, is involving themselves in several charities, demonstrating their interest and longing to help the community and other people in need.

The Guardian published an article titled 'You want fries with your poverty wages and exploited McDonald's workers?', which was based off of the fact of McDonalds treating their employees in illegal and criminal manner.  In New York City, november 2012, approximately 200 fastwood workers belonging to the McDonalds industry, went on strike to demand hourly wages of 15 dollars and the right to form a union. This protest arose strikes, organizers and protests in 150 US cities, and at least 33 countries.

In Brazil, the Food and Hospitality Workers Union (Sinthoresp) has been battling McDonald's over issues including wage theft, poverty-level pay and mistreatment of pregnant workers. Demonstrations were planned for Thursday at McDonald's in five Brazilian states. Fast-food workers in Japan will protest at 30 McDonald's locations in 30 prefectures, calling for an hourly wage of ¥1,500 – about the equivalent of the US $15 per hour. In South Korea, a protest was planned in front of a major Seoul McDonald's.

South Korean labor leader Cheong Ok-soon explained the action to the Local Press: "Everywhere you go in the world, fast-food workers are suffering with low wages, long hours and unstable employment. They can't live a normal life under the working conditions they face now, so they have no option but to fight in solidarity." This shows that McDonalds is underpaying and abusing their workers on an international basis.

Based off of these situations, it appears that McDonald's lacks ethical aspects by abusing the right's of their employee's and co-workers in various countries; particularly less-developed and third world or second world countries. They appear to give poor working hours; therefore decreasing their employees health rates significantly, as well as underpaying them; leaving the company wealthy, but leaving their employees on a low-wage. 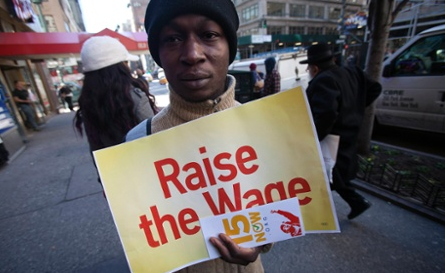 Corporate Governance defines the people and the procedure that occurs when a company has to make a major decision. The major decisions within McDonald's would be made by the owners, and the higher ranked positions within the business.

McDonald’s Corporate Governance is written on their official company website that their ‘success is built on a foundation of personal and professional integrity. Hundreds of millions of people around the world trust McDonald’s. We earn that trust everyday by serving safe food, respecting our customers and employees and delivering outstanding Quality, Service, Cleanliness and Value (QSC&V). We build on this trust by being ethical, truthful and dependable.’

The McDonald’s corporate Governance lacks validity, due to the vast number of negative issues founded in the past revolving around their industry. In one of the most recent scandal’s the industry had in 2014, McDonald’s global sales dropped 2.5 percent. The decline included a 3.2 percent drop in the US, and a 7.3 percent drop in the unit encompassing asia, the middle east and africa. These mass drops followed in July 2014, when a TV report showed workers at a McDonald’s supplier repacking expired meat. McDonald’s is now unable to serve much from its menu, including Big macs and Chicken McNuggets- two of the most famous McDonald specialities.

A CNBC report was released about the fast-food joint, claiming that the results ‘were the worst worldwide month in the last 10 years, once trading-day adjustments are taken into account.’ These reports demonstrate that McDonald's Corporate Governance is indeed conflicted with McDonald's latest food catastrophe, and their actions are extremely unethical towards their customers, and they are now losing their customers because of this.

McDonald's has been accused of having a negative impact on the environment in more than one way; revolving around the fact that they have built hundreds of factories around the world to produce their products; therefore leading to pollution. McDonald's is distributed amongst 119 countries; therefore the amount of factories and work involved to make their products, will significantly impact the air and the environment around them.
McDonald's also continue to use paper and plastic based cutlery and eating utensils, such as paper plates and plastic forks, which means they are continuing to abuse the environment by tearing down their trees to help make their eating utensils, as well as throwing out their plastic wastes, which is also very damaging, as plastic is difficult to break down.

The McDonalds food industry has been criticized throughout their business career in terms of the ingredients within their products. In Mid-July, 2014, there was a scandal in Hong Kong, involving the McDonald's industry, which resulted in Hong Kong having to remove their famous 'Chicken McNuggets' and 'Chicken McBurger's' from their food menu. This was done after a chinese food supplier was found to be taking poultry that had expired, then re-processing the meat and serving it up for customer consumption. The operation 'Shanghai Hsui' is where McDonalds is known to have their ingredients flown in from, and it has now closed down due to health and safety violations.

McDonald’s said: “We reiterate that until today, all the food sold at McDonald’s restaurants conform to the food safety standard under Hong Kong legal regulations.”

In 2009, an experiment was done on some of the McDonald's products, in order to give viewers an idea of the chemicals and toxins that went into their food. Morgan Spurlock, who is an American entertainer, reporter and documentarist, recorded his experiment of McDonalds french fries and burgers, alongside a regular burger and french fries, in order to gain an understanding of which food would expire the fastest. After a ten week period, the McDonald's french fries appeared to still be edible; suggesting that the ingredients were not natural nor real potato. This caused questioning amongst viewers and customers, and caused McDonald's an extremely unsanitary, unhealthy, and very unethical reputation. 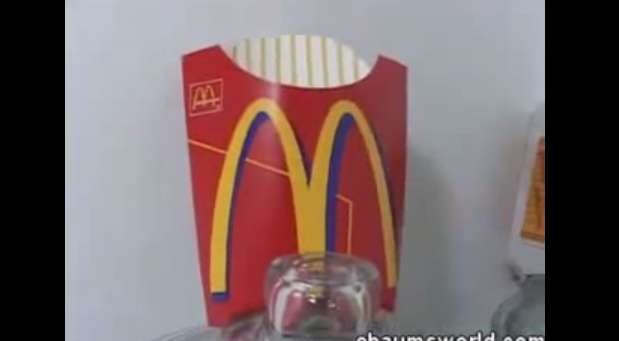 McDonald’s also claim to invest in farmer training. In the USA and Canada, their franchisees are investing over $6 million in a farmer technical assistance program.
In addition to this, McDonald’s claim to support ‘small holder’ farmers in Guatemala. The effort includes collaborating with TechnoServe, an international non-profit and leading provider of agricultural technical assistance, as well as SCAN (sustainable commodities assistance network). They train up to 13,000 farmers in Guatemala and Central America. They train and provide farmers with technical assistance to produce their coffee in a more sustainable manner. Mcdonald’s give farmers the tools the need to improve their production, so they can deliver more consistent, high-quality coffee beans, and increase their chances of their yield being sold for an improve price, which will also improve their livelihood.  and to purchase a majority of their Arabica bean coffee from countries such as Columbia, Guatemala, Costa Rica, El Salvador and  Brazil. Their fair trade therefore demonstrating international reaches, particularly in countries less developed than the U.S, where McDonald’s originated.
However, in spite of having fair trade coffee- McDonald’s do not offer fair trade ingredients for their other products; including both food and beverage. Therefore, their fair-trading is rather limited in terms of their product majority. Improvements should be made in terms of increasing the amount of fair trade, in order for them to increase their ethical morality and company reputation.
However, what McDonald's has done extremely well, is including fair-trade products from a wide variety of countries.

In April 2009, a Hong Kong Independent Commission Against Corruption had reported a case where a  McDonald's restaurant executive was getting additional money slipped to him between his all-beef patties, special sauce, lettuce, and cheese.
Lau Si-sing, the managing director of McDonald's Restaurants (Hong Kong) Limited, was convicted at Hong Kong's District Court, due to him having took approximately 2.5 million Hong Kong dollars, in illegal kickbacks from a Thailand-based corn supplier, and asking the supplier to lie to investigators.

This is one case which demonstrates Corruption amongst the employers and suppliers of the McDonald's corporation, and violates the ‘Standards of Business Conduct for Employees’:

McDonald's is committed to conducting business ethically and in compliance with the letter and spirit of the law. This commitment is reflected in McDonald's Values. Inherent in each value is our commitment to be ethical, truthful and dependable and this is reflected through our Standards of Business Conduct which serves as a guide to making good decisions and conducting business ethically.

McDonald’s announced in January, 2014, that they will begin purchasing verified sustainable beef in 2016; the first step on a quest to purchase sustainable beef for all its burgers worldwide. Although McDonald’s has claimed they will start this in 2016, they have not given any further information in terms of the pricing of their newly founded ‘beef’, nor have they stated what they would define ‘sustainable beef’, as. McDonald’s also haven’t offered any information in terms of what their goals are, and the percentage of its beef might come from such sources by then. Langert, the CEO of the corporation, reported to GreenBiz/com that the chain isn’t ready to commit to a specific quantity. With this little amount of given knowledge, the consumers are still left to eat unsustainable meat for the next two years, and aren’t given any knowledge of what to expect in the future.